Kanye West Is A Devil, Not A Christian

2nd Timothy 3:1-5, “This know also, that in the last days perilous times shall come. For men shall be lovers of their own selves, covetous, boasters, proud, blasphemers, disobedient to parents, unthankful, unholy, Without natural affection, trucebreakers, false accusers, incontinent, fierce, despisers of those that are good, Traitors, heady, highminded, lovers of pleasures more than lovers of God; Having a form of godliness, but denying the power thereof: from such turn away.”

Our text Bible passage warns believers about counterfeit Christians, those who “HAVING A FORM OF GODLINESS,” but “DENYING THE POWER THEREOF,” are fakes in the churches! The Scriptures teach us that that “POWER” is The Gospel. Romans 1:16, “For I am not ashamed of the gospel of Christ: for it is the power of God unto salvation to every one that believeth; to the Jew first, and also to the Greek.” Notice that to be saved there MUST be two things: the GOSPEL and FAITH.

In the book of Acts, we read about a demon-possessed woman who followed Paul and Silas, having “a spirit of divination,” who “brought her masters much gain by soothsaying.” Let me stop there for a moment. Notice that this demon-possessed woman was in bondage to some evil men (“her masters”). Some things never change in the world. Wicked people will take advantage of the weak if they can. This woman, who had a demonic spirit in her, followed Paul and Silas and told everyone that “THESE MEN ARE THE SERVANTS OF THE MOST HIGH GOD, WHICH SHEW UNTO US THE WAY OF SALVATION”...

Acts16:16-19, “And it came to pass, as we went to prayer, a certain damsel possessed with a spirit of divination met us, which brought her masters much gain by soothsaying: The same followed Paul and us, and cried, saying, These men are the servants of the most high God, which shew unto us the way of salvation. And this did she many days. But Paul, being grieved, turned and said to the spirit, I command thee in the name of Jesus Christ to come out of her. And he came out the same hour. And when her masters saw that the hope of their gains was gone, they caught Paul and Silas, and drew them into the marketplace unto the rulers, And brought them to the magistrates, saying, These men, being Jews, do exceedingly trouble our city, And teach customs, which are not lawful for us to receive, neither to observe, being Romans.”

From the preceding passage of Scripture we learn that even a demon-possessed person can speak the truth. The woman with a spirit of divination wasn't saved, yet she knew that Paul and Silas were preaching the truth of the Gospel (or at least gave the impression of it). Kanye could be demon-possessed!

Also, please notice in the following passage of Scripture that Simon the sorcerer was revered by the people, who said of him: “THIS MAN IS THE GREAT POWER OF GOD”! ...

Acts 8:9-11, “But there was a certain man, called Simon, which beforetime in the same city used sorcery, and bewitched the people of Samaria, giving out that himself was some great one: To whom they all gave heed, from the least to the greatest, saying, This man is the great power of God. And to him they had regard, because that of long time he had bewitched them with sorceries.”

That sure sounds like Kanye West to me! Watch this YouTube video of Kanye called: “Power” (these are the same type “sorceries” by which Simon bewitched the people).

In the following retarded YouTube video featuring Kanye West allegedly giving his salvation testimony, he utters all sorts of religious lingo, but never actually mentions what comprises The Gospel. Kanye never tells anyone how he got saved. I once heard something that I've seen to be very true—“As the churches become more worldly, so also is the world becoming more churchy!” You better believe they have! The churches today have become so worldly that all distinction that sets true Christians apart from the ungodly world has been lost. The name of the video is: Kanye West's Born Again Testimony. In this contemptible video, Kanye makes all of the following references, which trick the crowd into assuming he is a Christian, but he never mentions the Gospel (i.e., the power of God unto salvation to them that believe it). Literally, this is the sole extent of Kanye's so-called “Christian” testimony...

Those are all nice comments, but none of them compromise The Gospel. Remember, this video is called: “Kanye West's Born Again Testimony.” I triple-dog dare you to show me a clear Gospel testimony from Kanye West. You cannot! Kanye is a WOLF in SHEEP'S clothing!

Even more disturbing is that if you look at the viewer comments on YouTube under the video, you'll find all of the following ludicrous fifteen statements. I felt like vomiting and couldn't read anymore comments from these fools. These deceived people are all blinded by Satan, spiritual retards, and have no clue what it truly means to be a 'born-again' Christian. They idolize Kanye. I simply took the first fifteen comments are they were entered, I didn't leave any out, nor did I arrange them differently. Not one person saw through Kanye as a wolf in sheep's clothing...

Dear reader, none of that compromises THE GOSPEL! The Devil loves to obscure the truth of the Gospel with religion. I listened to a wonderful MP3 sermon yesterday by Pastor Jack Hyles (1926-2001). The sermon is called: “Yea, Yea, And Nay, Nay.” In the sermon Dr. Hyles makes this helpful statement:

I love that truth by Brother Hyles!

Check out this disturbing screenshot below of rapper Kanye West in November of 2019, performing by invitation at Joel Osteen's worldly Lakewood Church in Houston, Texas... 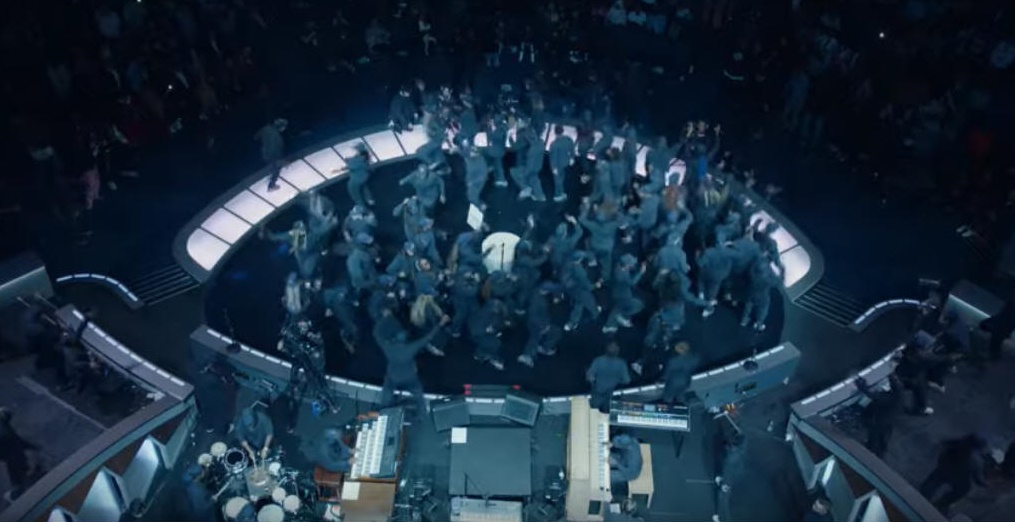 ABOVE: Worldly reprobate Kanye West and his demonic singing group performing at Joel Osteen's Lakewood Church in November 2019. Kanye became an overnight religious celebrity in apostate churches across America, merely for professing to be “a Christian” in 2019. I have yet to find any testimony of his faith in the Gospel. Remember, even Satan transforms himself into “an angel of light” to deceive his prey (2nd Corinthians 11:13-15). The Devil is a beautiful liar!!! The 'ALL SEEING EYE' is the universal occult symbol for promoting the coming Antichrist, the Man of Sin! The eye itself represents Lucifer (the god of this world - 2nd Corinthians 4:4), who gives illumination to his worshippers. Occultist Alice Bailey called use of these symbols to awaken the public (to their Luciferian plot): “The Externalisation Of The Hierarchy.” Simply put, the Devil is preparing the world for the appearing of the Antichrist. This is why the end time sin of homosexuality is being promoted worldwide, because it is the most debasing human act, selling one's soul to do evil. A world of sin will embrace the Man of Sin!!!

Kanye West recently said publicly that he fully expects to one day be U.S. President. It wouldn't surprise me! I found an interesting article today titled: “We Asked Religious Experts About Kanye West's 'Jesus Is King'.” In this intriguing article by Kristin Corry, the subtitle reads: “Ahead of the release of Kanye's ninth album, we talked to divinity professors to put the rapper's turn to the Lord into context.” That caught my attention, curious to learn about Kanye West's theology.

Could Kanye West be positioning himself for politics? ...

"If you want to do anything with the Black people in this country you still have to go to or go through a Black church," Dr. Jay-Paul Hinds, an Assistant Professor at Princeton Theological Seminary, tells VICE. "The political election season is warming up again and you're going to see politicians in the churches again because it's still the main avenue by which you reach the African American community."

Kanye's fixation with the Black church has implications beyond what Jesus Is King will sound like. The optics of the Trump-adjacent rapper who said slavery sounded like "a choice" making his rounds at institutions that preach theology that dates back to enslavement should draw skepticism.

"It raises questions of how does [Kanye] situate himself to that particular [Black Christian] prophetic tradition that is much more interested in the social good and social welfare as opposed to personal piety," Visiting Assistant Professor at New York University Dr. Xavier Pickett says.

I had to look up the word “commodify” in the following quote. It means to monetize something to make money, to turn it into a commodity. In the case of Kanye, to commodify effectively means to exploit Christianity for selfish interests...

...What is the difference between him [Kanye] making a song like "Jesus Walks" and him making a conceptual album like Jesus Is King? What does it look like to commodify religion and the church?

I agree with Professor Jay-Paul Hinds of Princeton Theological Seminary, who says:

The danger is you really do lose the message in this repacking of the gospel in so many different ways. The focus becomes how it's communicated rather than the message itself.

My fear is for how many people were at New Birth who hadn't been to church in years and decided that Sunday I'm going to turn my life around because of what Kanye said. I'm going to be born again today because of what Kanye said. There's an irresponsibility to it when you get in that kind of forum. You can't do that every week. You may be getting people converted initially but are these people then going to communities to help them develop a real ethical lifestyle? [emphasis added]

In other words, Kanye West is a big time false prophet who has perverted the Gospel. There is no such thing as “repackaging of the Gospel.” To do so is to corrupt the truth! Anyone who repackages the Gospel has been inspired by demons! The Gospel is the 'GOOD NEWS' of Christ's death on the cross for our sins, His burial, and bodily resurrection three days later (1st Corinthians 15:1-6). Kanye West has 'A FORM OF GODLINESS,' but he is guilty of 'DENYING THE POWER THEREOF'! That 'POWER' is The Gospel. The Word of God admonishes us 'FROM SUCH TURN AWAY'!!!

Kanye's teachings of multiple spirits working through him is witchcraft, not Bible Christianity!

ABOVE: As an interesting bit of trivia, Margaret Hamilton (1902-1985) who starred as 'The Wicked Witch of The West' in the 1939 classic film, The Wizard Of Oz, was a Sunday school teacher in real life. Margaret broke her foot on the set making the film.

“Faith is the only righteous thing that I can do!”
—Pastor Jack Hyles, a quote from the MP3 sermon titled: “God's Reversal Of Psalms 51”