Brother Lester Roloff (1914-1982) often said, “The world is sick and tired of a bunch of Casper Milquetoasts climbing around in the pulpits today.” What or who is Casper Milquetoast? The term originated from a comic strip character in the 1920's named Casper Milquetoast. The term has come to define someone unassertive and timid. Brother, this describes most Baptist pastors today. Today's pastors are pansies! Is your pastor a Casper Milquetoast character?

Today we'd call such shallow pastors “Yellowbelly” from the Canadian comedy show Second City TV. A pastor who won't preach on Hell, fire and damnation from the pulpit is a yellowbellied coward. We need some preachers once again with backbone, not a wishbone! God has been faithful. I wish I could influence some men of God to get worked up! I'm trying and praying brother. The Lord is still able. God deserves our best as Christians! I'm tired of pastors who dress in fancy new clothes and have that gleam in their eye, but they avoid preaching on anything offensive and the alters are always empty at invitation time. Of course the alters are empty, there is no preaching that produces repentance! The baptistry gets used once every 6 months. Soul-winning is not taught. There is no organized time for the church to go witnessing in public. There is no bus ministry.

Brother Roloff says, “There's only one way to speak with authority and that's to saturate your soul and your mind with the Word of God.” The reason why pastors today are dead is because they are listening to dead ministers instead of the authoritative Word of God. I'm not trying to pick on Bob Jones University, but their primary focus today is to educate students in the “Liberal Arts.” That's like a Christian automotive-repair school. We need Bible Colleges to train Christian workers. I'm sick and tired of these wet noodles, spineless preachers, who come in from the Jell-O seminary with their tapioca message of the power of positive thinking.

We Need Above Average Preachers Who Actually Preach

The great need of the hour is PREACHING PREACHERS!!! A pastor cannot kowtow to his congregation and be the man of God that he ought to be. You've got to say it like it is, even at the risk of losing members. A preacher is supposed to say what God lays upon his heart. As Brother Roloff says, “My preaching is none of my business!” See, “TEACHING ON PREACHING!”

People are becoming desperate for help. My heart breaks often, wishing that I could personally help many of my web visitors who are struggling. I have heard so many heart-wrenching stories over the years, from dear people who are hurting. My friend, God needs you. There is a place in God's choir that only you can fill. If you are absent, no one else can replace your unique personality. God Needs Your Personality (by Dr. Jack Hyles). I need you. Without you my ministry has no purpose. I am hear to help you know the Lord Jesus Christ, and then to grow in grace and faith as a born-again Christian. “For we walk by faith, not by sight” (2nd Corinthians 5:7).

Folks, the end time's come. The field is white, the laborers are few. We have the greatest opportunity of any generation, that ever lived, to reach desperate souls for the Lord Jesus Christ!

By God's grace I'm doing my part to reach others. If every Christian believer did their part, we could reach America for Jesus Christ. The biggest mistake that any Christian could ever make is to think that the efforts of one person couldn't make a significant difference in the world. One Christian plus God equals a majority! The homosexual community are going totally against the Word of God. They are trying to intimidate and silence Christians around the Country, but we have God on our side, because we are on God's side. There is no controversy if you believe the Holy Bible!

Homosexuals have been trying to force their sickening wicked lifestyle upon our children and the churches for the past 50 years. They're digging their way into the fires of Hell. The wicked liberal newsmedia always tries to play the race card, associate Christians with the Ku Klux Klan, demonize us as hatemongers and bigots; but they won't dare say that God is wrong! Don't make God angry by saying that homosexuality is OK, because it's really not! God hates all sin, including homosexuality, which is a perversion of nature, sex and courtship. God doesn't make mistakes. Two men cannot naturally produce a child via carnal knowledge, nor can two women. The sinful world continually misinterprets God's Word, changing it into a lie as Romans 1:25 said they would, in an attempt to justify their wickedness.

America has gone to hell. Patriots are now now strongly labeled as “terrorists” in hundreds of Hollywood movies; such as, “DeJavu” with actor Denzel Washington. Few people realize that the fascist CIA (who started Homeland Security after 911) have a liaison working in Hollywood to incorporate brainwashing propaganda into movies. Literally, Americans are being turned against themselves and will be destroyed by their own stupid ignorance. The real terrorists are the criminals who've hi-jacked The White House since John F. Kennedy's assassination and are now controlling the entire federal government. Congress has soul their souls to the Devil. Apart from divine intervention, our nation is effectively already doomed. America never was a truly free nation, evidenced by the Masonic control of the United States since its inception in 1776. The trick is to con people into thinking they are free while enslaving them further.

I wish I could wake America up! Brother, God's got to rule. Jesus is Lord! The Holy Spirit is our administrator!

Do you realize what has taken place? We've lost a whole generation in America! The fields are white, but the laborers are few. There's only two problems in America: the PREACHER and the PAPA! You get those two fellas straightened out and we'll be on our way to revival. Oh, how we need unapologetic preachers who proclaim the inspired Word of God!

Our ONLY authority as Christians is the Word of God. If the state goes against the Holy Bible, the state is wrong! When king Nebuchadnezzar ordered three young Christian boys to bow to a Masonic obelisk, they refused on the grounds of their Biblical faith. But you say, aren't we commanded to obey the higher powers in Romans 13? Yes, but the government is the lower powers. The U.S. Constitution is a higher power than the government. And God is the highest power of ALL!!!

“Sometimes you may leave here and say, 'I wonder what he's mad about?'
I'm not mad about anything, I just know one thing—whatever a
preacher quits preaching on, is what his church will fill up with!”

SOURCE: Pastor Phil Kidd, a quote from the needful sermon “I AM Ashamed.”

God deliver us from this sissified generation of Caspar Milquetoast, pink-tea-and-lemonade, soft-soapin', sissy-britches-wearing, ear-ticklin', back-scratchin', yellowbellied, Clark Kent, pantywaist, compromising, pussyfootin', unmanly, lazy-boy preachers who can't preach their way out of a paperbag! God give us some leather-lunged, barn-stormin', window-rattlin', shingle-pullin', truth-loving, uncompromising, manly, hell-fire and damnation PREACHERS!!! America needs PREACHING PREACHERS!!! The reason why men don't preach anymore is because they're being mentored by apostates, false teachers, heretics, sissies and old fuddy-duddy professors. JUST GIVE ME THE KING JAMES BIBLE!!! God is the preacher's mentor! We'd have a lot more TRUE WORSHIPPERS in America if we had a lot more TRUE BIBLES, TRUE CHRISTIANS, TRUE CHURCHES and TRUE PREACHERS!!!

“The worst pervert in America is the Gospel pervert!”
SOURCE: Brother Lester Roloff, from the sermon, “The Gospel Perverts Or Jesus?” 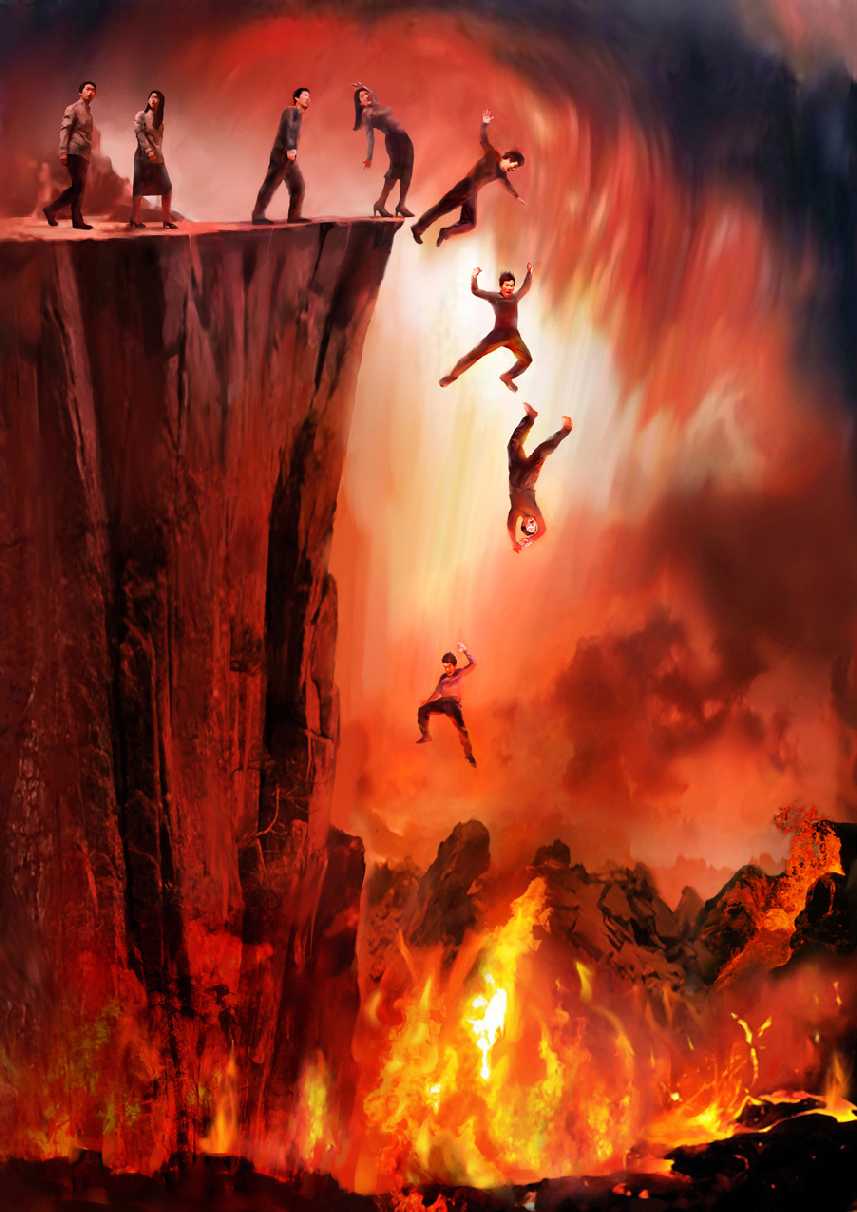 “In flaming fire taking vengeance on them that know not God, and that obey not the gospel of our Lord Jesus Christ: Who shall be punished with everlasting destruction from the presence of the Lord, and from the glory of his power.” —2nd Thessalonians 1:8-9

They Have No Rest Day Nor Night”

Revelation 14:11, “And the smoke of their torment ascendeth up for ever and ever: and they have no rest day
nor night, who worship the beast and his image, and whosoever receiveth the mark of his name.”

Another Gospel Which Is Not Another

“It does not take a majority to prevail ... but rather an irate, tireless minority,
keen on setting brush fires of freedom in the minds of men.” —Samuel Adams

“You don't go to Hell because you won't quit your sinning!”
SOURCE: Pastor Curtis Hutson; Quote from the classic sermon, Why Do Men Go To Hell? (exposing 'Lordship Salvation')

“When may a revival be expected? When the wickedness of
the wicked grieves and distresses the Christian.” —Billy Sunday 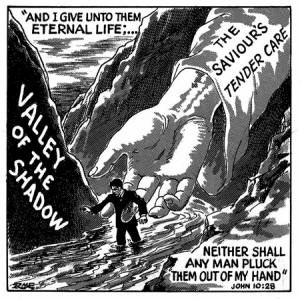 “Only the Word of God can make you a man of God!”
—a quote by Pastor Ralph “Yankee” Arnold from the awesome sermon, “The Sure Word of Prophecy.”