What Will Ye Do In The End Thereof?

Jeremiah 5:31, “The prophets prophesy falsely, and the priests bear rule by their means; and my people love to have it so: and what will ye do in the end thereof?” 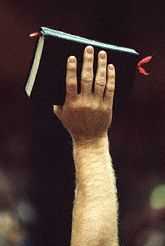 There's a common saying, “There's nothing new under the sun.” There is much truth to that. The apostasy in today's churches is not something new, although it is unprecedented in the scale of worldwide deception. During the Old Testament time of Babylon, the people of Israel were living in rebellion against the Lord. Like today, they committed horrible evil and said it was God's will . . .

Jeremiah 7:8-10, “Behold, ye trust in lying words, that cannot profit. Will ye steal, murder, and commit adultery, and swear falsely, and burn incense unto Baal, and walk after other gods whom ye know not; And come and stand before me in this house, which is called by my name, and say, We are delivered to do all these abominations?”

We hear people today in America saying that abortion is acceptable to God. Some Godless people say that homosexuality is OK, and public nudity is OK, and stealing is OK, and adultery is OK, and idolatry is OK, and bearing false witness is OK, and corrupt Bible versions are OK, and multiple plans of salvation are OK, et cetera. Tragically, mainstream evangelicalism is slowly embracing homosexual rights, and the churches are becoming tolerant of homosexual organizations, like AWAB. Walt Disney is 100% pro-homosexual, and many churches support Walt Disney by using their music. I know an Independent Baptist church whose youth department performs “Aladdin” and “Lion King” scores from the films. Walt Disney is steeped in sex perversion. Churches are becoming indifferent toward doctrinal and moral corruption.

Notice that Jeremiah 7:31 says the priests rule by their own means. All of these new Bible versions are manmade. They come from a manmade Greek manuscript that God did not author. These are the Alexandrian, Egypt manuscripts. The only modern Bible version that you can trust is the King James Bible, which is translated from the Textus Receptus, which originated from the Antioch, Syria manuscripts.

The Bible foretold of the time when people wouldn't listen to sound doctrine. 2nd Timothy 4:3, “For the time will come when they will not endure sound doctrine; but after their own lusts shall they heap to themselves teachers, having itching ears.” As we learn from Jeremiah 5:31, there was a time like that in the Old Testament, when Israel wouldn't listen to the truth.

Biblically, sex is a good thing, made by God to be a blessing. Albeit, physical relations is a gift from God to be enjoyed only within the boundaries of a marriage commitment. Marriage is quickly becoming a thing of the past in America, because of the corrupt court system that punishes men for trying to be godly husbands. Sexual immorality is the natural remaining option. Since men are no longer permitted to lead their wife, home and children with authority (which is now legally interpreted in most states as a form of domestic abuse), many men are abandoning the whole idea. Men are encouraged to seek sex without a marriage commitment, which is sinful, but nevertheless has become the American way. One evil begets another evil.

Literally, millions of young American women under the age of 25 already have 2-5 children and are divorced! In more than twice the cases, it's the female who files for divorce. This is the result of insane feminism that has brainwashed women to expect perfect husbands, who cannot compete with the perfect handsome hunk on television who never does anything wrong. It's TV fool!

All we are hearing about from leftist, lesbian, liberal, feminists is about women's rights, but what about a man's right to discipline his own wife when she is wrong? Sound crazy? The courts refuse to recognize a man's husbandly rights. There is no such thing as a man raping his own wife, that is absurd. I do not agree with a man forcing his wife. That is not the love of God which the Lord commands husbands to have for their wives. But to convict a husband in a U.S. court for raping his own wife is insane. If a women submits to Biblical teachings, then she must concede that her husband has a God-given right to RULE OVER HER (Genesis 3:16), which includes when he desires sex, and that may sometimes include wifely discipline (just as a parent has a right to lovingly discipline a misbehaving child).

In our insane American society, when a wife misbehaves there is absolutely nothing a husband can do, which results in a $50,000,000,000 a year divorce industry in America for dishonest queer judges and thieving thug lawyers. It is the kooks, quacks and queers who boldly reject such Biblical teachings, and demand equality of authority for wives (which was Lucifer's sin in Isaiah 14:12-17), that has horribly led our nation down a damning path of pride, immodestly, disrespect for authority, sexual immorality, rebellion, hatred of parents and preachers, murder by abortion, divorce and the destruction of the family unit, home and society. Truly, we get what we deserve as a nation. I recently saw a documentary about teens who get life behind bars, for horrible crimes that they committed while under the age of 18. END

Matthew 9:37-38, “Then saith he unto his disciples, The harvest truly is plenteous, but the labourers
are few; Pray ye therefore the Lord of the harvest, that he will send forth labourers into his harvest.”