He Made The Stars Also

Moses tells us that God made the greater light to rule the day and the lesser light to rule the night. Then he drops a beautiful little orchid, as inspired by the Holy Spirit, when he says, "He made the stars also." (Genesis 1:16) The Bible has much to say about stars. Daniel tells us, "...they that turn many to righteousness shall shine as the stars for ever and ever." (Daniel 12:3) Job tells us that the morning stars sang together at the dawn of creation. We are reminded that Jesus is the Bright and Morning Star. When Deborah and Barak fought against Sisera, the stars in their courses fought for the right. When God became flesh, a star hovered over Bethlehem's manger.

I love the stars. It has not always been so. As a boy I loved the sun best. When I got about seventeen, suddenly a strange thing happened to me. My affection turned toward the moon. Those days have long since passed and gone, and now I prefer the stars. I often say at night "Twinkle twinkle little star, how I wonder what you are, up above the world so high, like a diamond in the sky." Sometimes I look at the stars and say, "Star light, star bright, first star I've seen tonight, I wish I may, I wish I might, have this wish I wish tonight."

Now what does the Lord mean when He says, "He made the stars also"? Well, to be sure, there is only one sun and only one moon, but there are many stars. There is only one Saviour, and there are very few bright leaders, but everyone can be a star. The stars in the Bible often are used to describe the angels, or God's messengers. Could we then say that the stars represent what we would call "little people"? It is wonderful how God uses little people. There were many great and wealthy men living in Palestine the night of the coming of the Christ Child, but the angels chose to appear to lowly shepherds watching their flocks by night. There were many scholars of the mast profound and various learning dwelling in Palestine, but to humble men of the fields did Heaven's choir sing that night. There were ascetics who had left home to fast and pray in deserts, but they heard not the angelic choir. It was not to them that angels appeared; it was not their ears that heard the angel's song. The greatest news the world has ever heard came to "stars," simple men, the kind like you and me.

None of the elite were chosen to carry the Babe of Bethlehem; this was reserved for a star named Mary. None of these were chosen to rear Him; this was reserved for a star, a carpenter, named Joseph. This is the way it has always been; God uses stars. Who killed Goliath? He was the least likely of all the son of Jesse-young David. Who defeated the Midianite army with 300 men? He was the least boy of the least family of the least tribe of the least nation of the world--little Gideon. Where do we find the leader of the Israelites who led them across the Red Sea? We find him in an ark made of bulrushes daubed with pitch by the hands of a slave lady and placed in the Nile River. Who gave birth to the great Moses? His mother was the little slave--Jochebed. Who sent the mighty Naaman to Elisha that he might be healed of his leprosy! A little maid did so. Who provided the food with which Jesus fed the 5,000? A little lad gave his lunch. Who rimmed the Mediterranean Sea with the Gospel and shook Europe for Christ? A little Saul of Tarsus. Who was the greatest giver mentioned in the Bible! A little widow. Who was chosen by Jesus as the greatest of all? A servant. Who drew Jeremiah out of prison? An unknown, Ebed-Melech. Who were the apostles? Simple men of Galilee were chosen. Yes, God gets His big lights from the stars.

One day God made a star and put it in the heavens. He said to that star, "I want you to shine in this one particular place. No one will ever notice you, but you'll be a part of the beautiful heavens." That star took its place the first night and the second night, the first week, the first month, the first year, the first decade, the first century, the first millennium, and for millenniums that star filled its place seeking no attention and getting no attention. No one ever looked and said, "What a beautiful star," but many looked and said, "Aren't the heavens beautiful tonight!" After millenniums of faithfulness, the Heavenly Father Who made the star one day said, "Star, thou hast been faithful over a few things, I will now make you ruler over many. Go and hover over Bethlehem's manger and tell the entire world that Christ is come; God is made flesh; a Saviour is born. Thou hast been faithful over a few things, J will make you ruler over many."

The great men of the Bible made mention of "their stars." Sometime read the last few verses of Paul's epistles and notice how many times he mentions the little people. Read David's farewell speech as he mentions his mighty men. Read of Moses who had his hands lifted by Aaron and Hur. Read of the band of men whose hearts God had touched who accompanied Saul when he went forth to Gibeah.

Not only does God bless little people, but God blesses little places. We all like the big places. When Jesus was born there were palaces, universities, estates, plush homes, and hotels, yet to a manger came the Saviour of the world. Where was the Saviour born? In a small manger he lay. Where was the Last Supper conducted? In a borrowed upper room they met. Where was Pentecost begun? Also in a borrowed upper room were they gathered. Where was David found? He was found humbly tending his sheep. Where was Gideon? He was threshing wheat behind the wine press. Where was the Son of God buried? In a borrowed sepulchre they laid Him. Where were many of the epistles written? Paul wrote many of them in the Mamertine Prison. Where was Moses called? From a simple burning bush did God speak to him. Where was PILGRIMS PROGRESS written? In a jail on milk bottle stoppers was it penned. To whom did Jesus appear and where did Jesus appear in the Old Testament? To the Hebrew children in a fiery furnace and to Jacob by the river Jabbok did He appear. Where was the book of Revelation written? John wrote on the lonely isle of Patmos. Where did Paul see the third Heaven? From a suburb of a little town called Lystra Paul viewed the heavenly beauties. Yes, God can bless your place. He uses little places.

Years ago when I was in college, I had been called to pastor the Marris Chapel Baptist Church in east Texas. I went back to college the next day and attended the preacher boys' class taught by the President of our college, Dr. H. D. Bruce. Dr. Bruce began with the front row and said, "Fellows, tell me what you did for God over the weekend." I was the first one asked of the over 200 students in the preacher boys' class. I stood and said, "Dr. Bruce, I was called to pastor a little church up in the country yesterday."

I couldn't understand. All the boys testified, but to none other did he say, "Sit down." After the last boy had testified, I stood and said, "Dr. Bruce, could I ask you why you made me sit down?"

He replied, "Mr. Hyles, you said you had been called to pastor 'a little church' up in the country." Then he looked at me sternly and said, "Mr. Hyles...there are...no...little churches!"

Not only does God use little people and little places, but He uses little things. He uses such things to carry out His purpose as a manger, a stable, swaddling clothes. What did Jesus use to feed the 5,000? He used five leaves and two fishes. What did He give Shamgar with which to slay the 600 Philistines? He gave him an ox goad. What did Moses use in the parting of the Red Sea and in the smiting of the rock? He used a shepherd's rod. What did God use with which to call Moses? He used a bush. What did the Saviour use in restoring the sight of the blind? He simply used mud! In what type of containers was the water poured which was turned into wine? They used old water pots found beside the road.

There are no little things to God. He upholds the sparrows' wings, paints the lilies of the field, and numbers the hairs on our heads. We find that even the insect under the microscope is as complete as a man with every minute detail arranged. Maybe you do not have much to give God. He does not need much; He just needs what you have. Don't forget that Christ appeared to shepherds in the field, to Stephen outside the gate, to Jacob as he slept with a stone for a pillow, to the Hebrew children in the fiery furnace, and to John on Patmos. He can appear to you; He can help you; He can use you--a little person in a little place with little things.

Our God also uses little tasks. Jesus could have preached a Sermon on the Mount every morning, but did not choose to do so. Each night He could have settled a stormy sea, but He did not. At Pilate's hall He could have been transfigured, but such was not the case. He could have ascended to Heaven daily at noon, but this He did not do.

His concern was about little tasks. On the cross while dying He cared for His mother and her needs. When He rose from the dead He folded the napkins and laid them in order. Michelangelo said, "Trifles make perfection, and perfection is no trifle." What is your task? Do it and do it well. A little person in a little place can use a little thing and perform a little task and receive a great reward.

TABLE OF CONTENTS | NEXT | PREVIOUS

“Every word in this Bible is inspired by God almighty!”
—Dr. Jack Hyles (a great quote from the classic sermon, “A Friend At Midnight.”)

“I am an old-fashioned preacher of the old-time religion, that has
warmed this cold world's heart for two thousand years.” —Billy SUNDAY 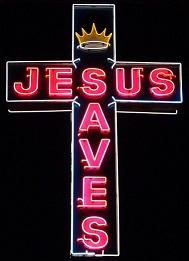