The Penalty of Hell

Sin Brings the Penalty of Death 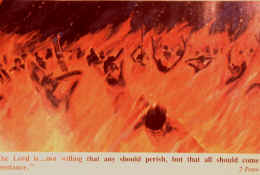 You must realize and admit to God that because of YOUR OWN SINFULNESS, you are under the CONDEMNATION OF GOD and are DESERVING of the PENALTY of HELL FIRE and DAMNATION.

The Bible makes this clear. WE EARN DEATH by the SINS WE HAVE COMMITTED, just as you would earn wages from working a job... “For the WAGES OF SIN IS DEATH” (Romans 6:23). The Scriptures declare that those who die without CHRIST AS THEIR SAVIOR WILL DIE A SECOND DEATH as well as a first death. If you are NOT saved, you are already spiritually dead. You are simply awaiting your future home in hell, the second death. You need to do absolutely nothing to go to hell, but you must be born-again to go to heaven.

The Bible speaks of a second death... “But the fearful, and UNBELIEVING, and the abominable, and murderers, and whoremongers, and sorcerers, and idolaters, and ALL LIARS, shall have their part in THE LAKE WHICH BURNETH WITH FIRE AND BRIMSTONE: which is the SECOND DEATH” (Revelation 21:8). “Blessed and holy is he that hath part in the first resurrection: on such the SECOND DEATH hath no power” (Revelation 20:6).

Committing Even One Sin Makes Us Guilty of All

How many people does a person have to kill to be considered a murderer? Obviously, JUST ONE! So likewise, how many lies does a person have to tell to be a liar? Again, JUST ONE!  Revelation 21:8 tells us that ALL LIARS will have their part in the SECOND DEATH (THE LAKE OF FIRE). James 2:10 affirms this, “For whosoever shall keep the whole law, and yet offend in ONE POINT, he is GUILTY OF ALL.” Once Adam and Eve had committed sin, they were bound for an earthly grave as well as an eternal grave in hell forever. Hell is the destiny of all those who are spiritually dead when they die. If you die in your sins, it is too late.

It is also worthy to mention that Adam and Eve only committed ONE SIN; thus, disobeying God. What was their horrible sin? Eating some fruit! It is common for people today to diminish the wickedness of sin. We must NOT make the sin of deciding how sinful sin is—ALL sin is wicked and wrong because ALL sin is rebellion against God. Also, Adam and Eve were not degenerate people before they sinned, they were perfect and upright. This teaches us that NO ONE is above sin. We ALL have the potential to sin, no matter how close we walk with God. The old sin nature CANNOT be tamed!

There seems to be a misunderstanding concerning spiritual death. May I say, the “second death” is NOT the same thing as “spiritual death.”  If you are NOT saved, you are already spiritually dead. The “second death” is when you die and go to hell.  Let me say again, if you are not saved—You are already spiritually dead! Your already a child of hell. That’s why you need to get saved, so you can have spiritual life anew in Jesus Christ.  Without Christ, you are of the Devil. Those who are NOT saved have the spirit of Satan working in them, “And you hath he quickened, who were dead in trespasses and sins; Wherein in time past ye walked according to the course of this world, according to the prince of the power of the air, THE SPIRIT THAT NOW WORKETH IN THE CHILDREN OF DISOBEDIENCE” (Ephesians 2:1,2). Satan has the great power of influence upon this old sin-cursed world.

The Bible teaches that the natural (unsaved) man is prone to follow worldly philosophies and entertainment (which are really Satan’s teachings and activities). People who are spiritually dead (unsaved) are naturally inclined to heed the Devil’s call because he is bankrupt of any goodness or integrity. Satan’s voice prompts his children to selfish thoughts, self-centered activities and self-righteous religion. Satan is the father of all liars and murderers! The Devil’s goal for each of us to keep us from doing God’s will. Satan has NO WILL for your life, he wants you to do “your own thing.” In so doing, you have forgotten about God. The road to Hell is paved with good intentions.

The Second Death is God's Judgment Upon Lost Sinners

The bottom line is this, WE MUST ALL STAND BEFORE THE JUDGMENT SEAT OF GOD SOMEDAY... “And as it is appointed unto men once to die, but after this THE JUDGMENT” (Hebrews 9:27). ARE YOU READY? The teaching of Hell may not be popular in the new millennium but it is a clear Bible teaching. Let’s look at some Scripture references concerning ETERNAL PUNISHMENT. “...suffering the vengeance of ETERNAL FIRE” (Jude 7). “And others save with fear, pulling them out of the FIRE; hating even the garment spotted by the flesh” (Jude 23). “...for their worm shall not die, NEITHER SHALL THEIR FIRE BE QUENCHED…” (Isaiah 66:24). “Where their WORM DIETH NOT, and the FIRE IS NOT QUENCHED” (Mark 9:44). “...Whosoever shall say, Thou fool, shall be in DANGER OF HELL FIRE” (Matthew 5:22).  “And fear not them which kill the body, but are not able to kill the soul: but rather FEAR HIM which is able to DESTROY BOTH SOUL AND BODY IN HELL” (Matthew 10:28).

Notice from the Scripture we just read that God has the power to destroy both our soul as well as our body. If “hell” only refers to the grave, then why should we FEAR. If the worst thing that can happen to me is to be annihilated (non-existent), then why in the world should I FEAR? This is the erroneous teaching of the Jehovah Witnesses. They are dead wrong! I always say the same thing to a Jehovah’s Witness, “If you're right about Hell, I’ll just be dead and unconscious someday; But if the Bible is right about Hell, you’ll burn in hell-fire for ALL ETERNITY.” So which road am I safer on, the Jehovah’s Witnesses road or the Bibles?  I’ll take the Bible road any day! “Ye serpents, ye generation of vipers, how can ye escape the DAMNATION OF HELL?” (Matthew 23:33). “And these shall go away into EVERLASTING PUNISHMENT: but the righteous into life eternal” (Matthew 25:46). If there is no consciousness in the grave of the dead, then how can one’s punishment be everlasting? The Bible must be taken at face value, it says what it means and means what it says. The Bible has much to say about hell. The Bible has more to say about hell than it does about heaven, read it for yourself.

Christ-rejecters are Condemned to Hell Already

We are CONDEMNED ALREADY and the WRATH OF GOD is upon us IF we have NOT accepted CHRIST AS OUR PERSONAL SAVIOR. Listen to the Words of John the Baptist, “He that believeth on the Son hath everlasting life: and he that believeth not the Son shall not see life; but THE WRATH OF GOD ABIDETH ON HIM” (John 3:36). “God judgeth the righteous, and GOD IS ANGRY WITH THE WICKED EVERY DAY” (Psalm 7:11). If you die in your sins, you must face the TERROR OF GOD. “Knowing therefore the TERROR OF THE LORD, we persuade men” (2nd Corinthians 5:11). The terror is NOT for the Believer but for the unbeliever. “And they journeyed: and the TERROR OF GOD was upon the cities that were round about them, and they did not pursue after the sons of Jacob” (Genesis 35:5). “It is a FEARFUL THING to fall into the hands of the living God” (Hebrews 10:31). For anyone to say that there is no hell or that hell does not have fire is a foolish thing indeed. What fear is there in facing God if there is no Hell which burns with fire. There is no fear in annihilation (ceasing to exist). No my friend, Hell is very real.