Romans 1:26, “For this cause God gave them up unto vile affections: for even their women did change the natural use into that which is against nature: And likewise also the men, leaving the natural use of the woman, burned in their lust one toward another; men with men working that which is unseemly, and receiving in themselves that recompence of their error which was meet.”

The New Oxford Annotated Bible reinterprets key portions of the Bible involving homosexuality and is now recommended reading by the promoters of sodomy in our culture.

The Culture and Family Institute of Concerned Women for America has recently published an expose of The New Oxford Annotated Bible, which reinterprets the Bible to negate or downplay what the Bible says about homosexuality, the sovereignty of Jesus Christ, and the sanctity of life.

Culture & Family Institute writer Al Dobras notes, "The new Annotated Bible-edited in part by pro-'gay' and feminist scholars-adopts 'gay' revisionist interpretations of Holy Scripture such as that God allegedly destroyed Sodom and Gomorrah for the sin of inhospitality-not homosexual sin."

The new commentary was produced, in part, by Dr. Carol A. Newsom, a feminist theologian who partnered with Dr. Sharon H. Ringe, to produce The Women's Bible Commentary. Dr. Ringe serves as a consultant to the Reconciling Congregation Program of the United Methodist Church-an "outreach" to homosexual, bisexual, and transgender Methodists.

God Says Homosexuality Is A Sin!

Homosexuality is a horrible sin (as is all sin)! One of Satan's common tactics is to CHANGE God's Word (the truth, John 17:17) into a LIE! Satan, in the form of a serpent, changed God's Word while speaking with Eve in the Garden Of Eden. God warned Adam and Eve not to eat the forbidden fruit from the tree of knowledge. God said they would DIE if they disobeyed Him (Genesis 3:3).

The serpent told Eve that she wouldn't die if she disobeyed God and ate of the forbidden fruit (Genesis 3:4). The Devil even tempted our Lord Jesus Christ three times by deliberately misinterpreting the Scriptures (Matthew 4:1-10).

Likewise, the Bible foretold that homosexuals would deliberately CHANGE the truth of God's Word into a LIE to accommodate their wicked lifestyle. Romans 1:25, “Who changed the truth of God into a lie, and worshipped and served the creature more than the Creator, who is blessed for ever. Amen.” Heathen man worships himself and the human body. This is the religion of “humanism.” When man elevates and exalts himself to the same level of God Who created him, that is the sin of Idolatry!

Homosexuality is rooted in the sin of idolatry, because homosexuals declare themselves to be the god of their own life, mind and body. In sharp contrast, Biblical Christianity is rooted in submissive obedience to God and His holy Word. This is why 2nd Thessalonians 1:8 says, “In flaming fire taking vengeance on them that know not God, and that OBEY not the gospel of our Lord Jesus Christ.” The gospel is that Jesus Christ died, was buried and resurrected after three days from the dead. If you OBEY that good news and receive Christ's sacrifice as full-payment for your sins, then you are forgiven and eternally saved.

“Who being past feeling have given themselves over unto lasciviousness, to work all uncleanness with greediness.” —Ephesians 4:19

Notice that Jesus said “ye will not come,” not ye cannot come.

Jesus came to SAVE SINNERS!  |  They “Knew Not Until the Flood Came”

What HAPPENS in Vegas, is RECORDED in Heaven!!! 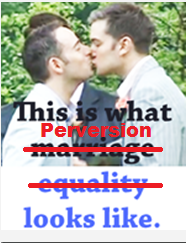 God Will Forgive Anybody

"Ye have wearied the LORD with your words. Yet ye say, Wherein have we wearied him? When ye say, Every one that doeth evil is good in the sight of the LORD..." —Malachi 2:17

There is a way out!

If you really love someone, you'll tell them the truth.

HELL FIRE (you'd better get saved before it's too late! by Pastor Danny Castle)